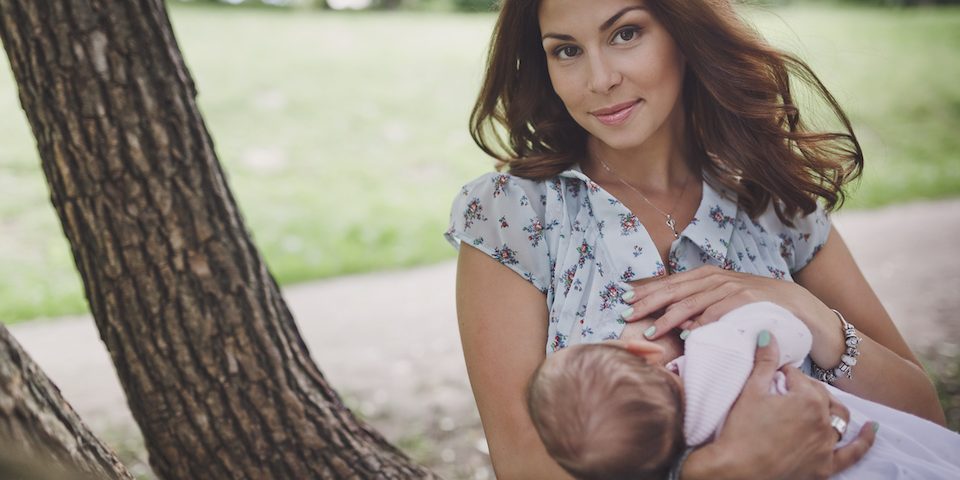 If you’ve followed me for a while you’ll know I’m a big advocate of breastfeeding. I’ve personally been breastfeeding (or pregnant) for the better part of the last several years. The health benefits are clear, the bonding is amazing and despite the horrible parts I’m about to discuss, I actually loved it.

After delivering my first baby, I was prepared for many of the crazy things I was about to endure: being terrified to sneeze or use the bathroom for fear I’d rip my stitches out, having my hair fall out at a terrifying rate, sore and cracked nipples, pumping, and of course, no sleep and erratic emotions. These were all things family and girlfriends had warned me about, so I had no fear about them – I was braced for the ride.The stuff no one warned me about though, was a lot worse.

I had only had Lola home for a few days and I was of course exhausted like I’d never been before, had just reconnected with my mom after a year of not speaking and my grandmother had just passed away, so when I was feeling some intense emotions with nursing, I didn’t think much of it. Lola and I had a rough start to breastfeeding, but I was adamant that we figure out the latch and deal with my copious milk supply. I had so much milk and it would spray so much and so fast that she was choking every time we fed.

But that wasn’t the half of it. Every time I fed her I got this overwhelming wave of sadness. It was sudden, intense and felt like total and utter doom. After a minute or two it would pass and I’d feel pretty normal again.

I assumed it was part of being one big ball of hormones after giving birth, but months later it was still happening. I mentioned it to Joe and we started calling it the “milk sads”. It was so intense that I started getting a little anxious before feedings knowing it was going to happen. In time, I got used to it but always wondered what the heck it was.

In my doctor head, I figured it had something to do with dopamine and prolactin (prolactin, one of the hormones that makes us lactate, lowers dopamine and vice versa) but I was too busy – and too tired –  to look into it much beyond that.

When I had my second baby, it happened again. Right away I got that rush of gloom and doom every time I nursed Gigi. I decided to take a look and see if this was a “thing” – if it was, it certainly wasn’t anything anyone warned me about. As I typed in “sadness with n…” into Google, before I even spelled out ” nursing”, it popped up. Clearly this is a thing! It’s called Dysphoric Milk Ejection Reflex and it is exactly what I thought: dopamine plummeting as prolactin spikes to cause the milk let down.

Dopamine is one of our happy brain chemicals. It’s responsible for motivation, focus and a positive outlook.

Even on a good day, I’m low dopamine so perhaps this is why this happened for me. And while I couldn’t find any conclusive research, I’m curious if this phenomenon happens more for women with PCOS. In my practice, most women with PCOS have issues with either low dopamine and/or high prolactin. Curious, huh?

DMER is not the same as postpartum depression. Its transient and a direct result of this temporary spike in prolactin before let down. After a few minutes things level out again. But it feels truly dreadful. For me the feeling is definitely sadness and gloom, but for some women with DMER, the feeling is more anxiety or agitation. Either way, there’s nothing you can do about it.

There are great herbs and nutrients to boost dopamine, but those would all lower prolactin and that’s not good for your milk supply – nor are they nutrients/herbs that I’d recommend to a breastfeeding woman (too stimulating for baby).

But it certainly helps to know that’s what it is! I had thought I was going nuts. And while you can’t take something to fix it, you can keep in mind that it’s not all in your head and that it will pass. This helped me just let it be for a few moments. I looked down at my sweet baby and knew I’d feel better soon. For more info on DMER click here.

Bring on the hot flashes and vaginal atrophy. Pregnancy is a time of high estrogen and high progesterone. The progesterone makes sure baby stays put and the estrogen is, amongst other things, responsible for the glow….and all that hair!  (This high estrogen keeps our hair in its last growth phase before falling out, so we don’t shed much and have the thickest hair of our lives.)

During the weeks after giving birth our estrogen plummets and can cause a host of issues on it’s way down, I was prepared for a breakout or two, my glow to give way to dark under-eye circles and my hair to leave on mass around 5 weeks out. I was not however prepared for the other symptoms the low estrogen would cause…..hot flashes were not the worst of it.

After a vaginal birth, there’s a lot going on “down there” and I thought when the soreness and swelling are gone and the stitches heal, we’ll be good to go. Uh-uh.

After about a week out I was itching like mad. It was the most uncomfortable I think I’ve ever been. Obviously scratching isn’t really an option so you just have to sit there and try to survive it. It was making it nearly impossible for me to sleep. Just thinking back on it makes me squirm. It was terrible. This symptom sends women running back to their OBGYN certain they have a yeast or other infection. I was convinced my latex allergy was to blame leading me to buy every “natural” maxi pad on the market – but no relief.

I had no infection, no allergy, thus no real treatment options. I was in agony. What the heck was this?

Others, like me, just tough it out – although ice and coconut oil offered a temporary reprieve. Luckily in my case, it resolved to barely noticeable by around 3 months – other women aren’t so lucky. If you have itching, be sure to see you OB/GYN and rule out infections or other issues, but know this may just be a consequence of prolactin keeping estrogen low and your hormone profile temporarily looking a bit like that of a post-menopausal woman.

And although it’s tough, watch the urge to scratch – the tissue is thinner, weaker and scratching is very likely to create small tears which can easily get infected.

I had heard one of the fabulous advantages of breastfeeding is that the “weight just falls off you”. I’d heard “the Breastfeeding Diet is the best!” That couldn’t have been farther from the truth for me.

Not only was my waist extra wide from an unclosed diastsis but despite my efforts, I had a really hard time leaning up and dropping those last pounds especially from my belly – which I’d NEVER had a problem with before, always hips and thighs for me. I struggled with fat loss all throughout breastfeeding. When I stopped breastfeeding Lola at 16 months, 7 pounds just fell off in about 2 weeks with no extra effort. What gives?

Next week, I’ll discuss how low estrogen and progesterone, often coupled with high cortisol from no sleep, make for a really tough weight loss battle for many breastfeeding mamas – and what you can do about it.