Lessons From My Grandma On Love, Life & Hard Work

Grandmothers tend to have a special place in the hearts of little girls – and my Grammy Ethel certainly had that place in mine. Throughout my life she was proud and loving of me in the most unconditional way and taught me so much about life, hard work and being grateful for what you have. 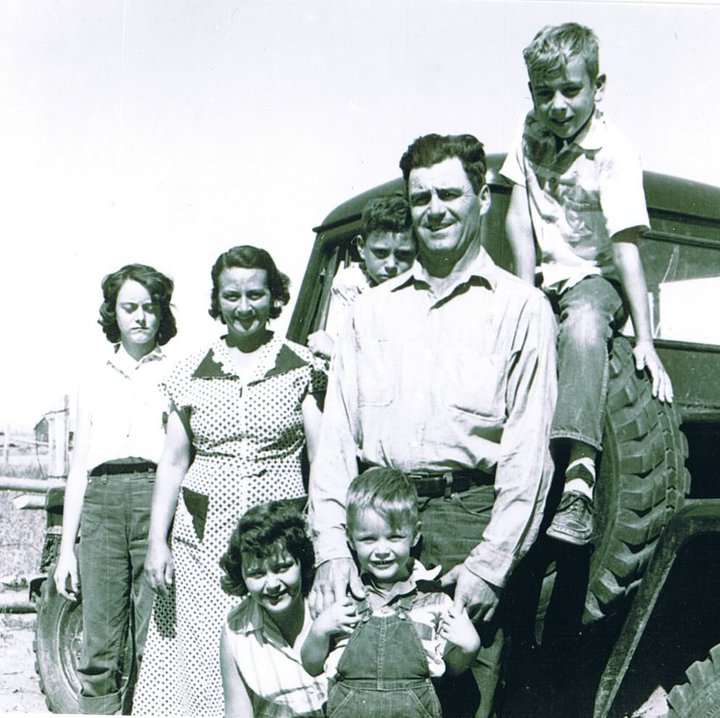 Kalanick Family Circa 1957 (My Dad is the little guy down in front.)

My Grandma was by no means a fancy lady, but she was class all the way.

She was kind, respectful, accepting, full of love and she never complained about farm life and the many, many hardships that it carries. My Grandma passed away just days after my baby girl was born. The whole thing seemed very whoo-whoo as we saw her passing and Lola’s birth come in such synchronicity… and that’s not the Kalanick way!

Given her prognosis in late summer, it didn’t seem she would be around to hear how my delivery went – although we all knew she wanted to. In the end though, she held on to hear that I had a healthy baby girl. During her last few weeks, she was on a lot of pain killers towards the end so she was sorta in her own world.

We were thousands of miles away, but she talked to us like were right there. Rose, my Grandma’s nurse, would text me and let us know when she was talking to my brother and I as if we were there in the room with her, and that she spoke to us, not like adults, but like we were the little kids that so loved staying at Grandma’s house. 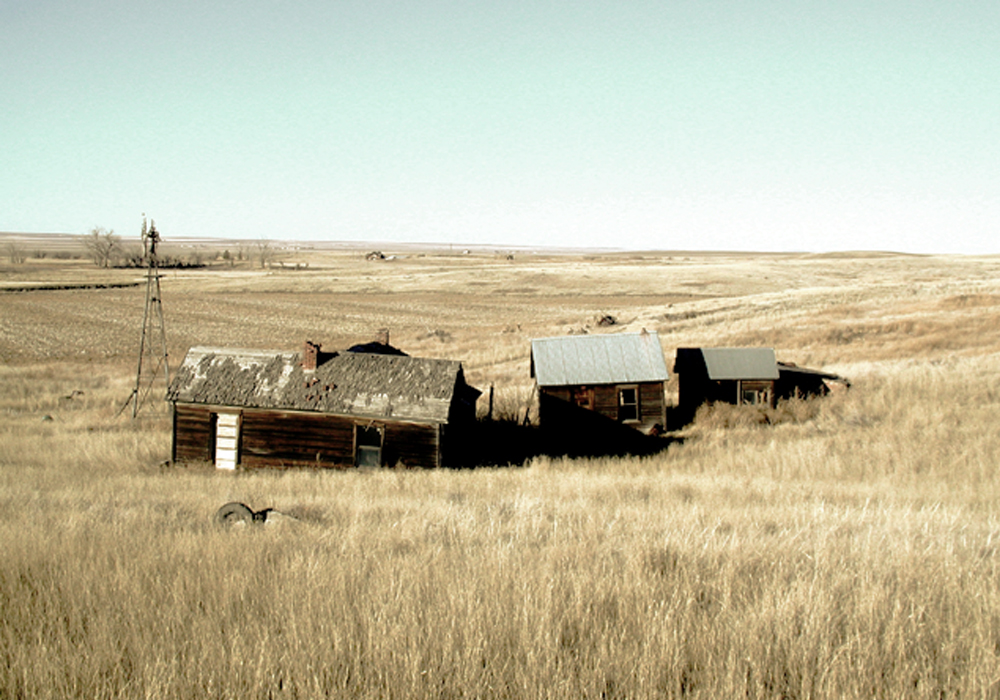 She worked side by side with my grandpa into their eighties on the land they cherished and worked so hard for.

Watching my Grandparent’s toil away on the farm for all of my formative years taught me that come rain or shine, you go to work – and you work hard.

There is no day off for a farmer. The work is hard and it’s unending, and they never complained one bit. It was the life they chose and they were grateful for it.

Thinking of the worn path from their house to the work shed, reminds me that we make choices and when we want something, we need to simply do the work to get it. I see this influence as I completed 12 years of college, as I find myself an entrepreneur and business owner – and when it comes to my health and fitness it’s evident there as well.

Its here that I can share this sense of hard work with my patients and the advice is simple: when we want to be healthy or we want a lean, fit body, that’s our choice, and we gotta do the work to get it. And it’s more work for some of us than it is for others – that’s just the way it is.

Doing the work is hard enough, doing it while complaining about it makes all the more tough.

So yes, it’s hard cooking all those chicken breasts each Sunday. And it’s work lugging those healthy meals with you day after day. It’s tough scheduling in workouts a midst all your other obligations. It’s painful to hit the gym so early some mornings or after a long day of at the office.

And who hasn’t felt the pain of passing up your favorite dessert or some other indulgence? How about the sting of watching someone skip their afternoon coffee break treat and drop 10 pounds almost effortlessly, while a simple change like that would do nothing for most of us.

But if we want the body, we gotta put in the time, make the unique sacrifices and do the work it takes for us as individuals to get there… and there ain’t no use in complainin’ about it! 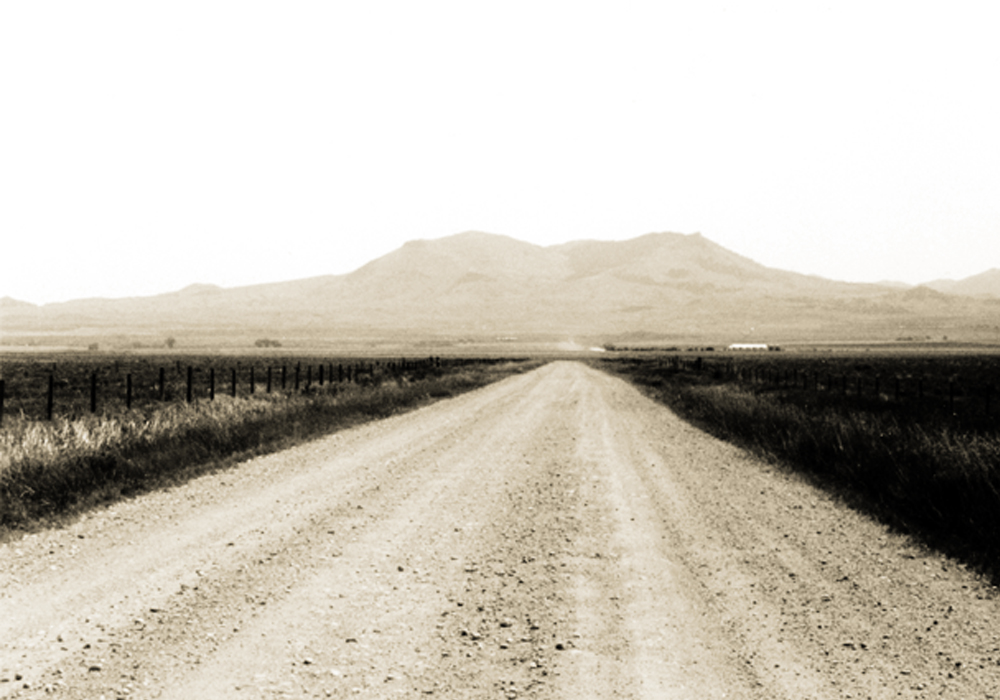 The dirt road leading to my Grandparents’ Farm.

And let’s not forget the gifts we so rarely are grateful for.

We live in the age of gyms so come rain or shine we are able to get exercise. We live in modern times and can get fresh produce year round. We also live in the age of wellness where being gluten free is so hip now that you can order in any restaurant and have your dietary needs met.

Today, being healthy is cool and so is doing yoga. We can order grass fed beef on the internet – I mean, we really do have it so good!

Next time we want to whine about how hard it is to stick on plan or pull off all this healthy livin’, remember that the work is just the work, simply do it and let’s spare ourselves the complaining and “wishing” it were not so tough – we all know the payoff is worth it.

All of us grandkids and my dad weighed in on the obituary below, but my brother and his wife really get the credit – and it’s just perfect. It not only reminded me of what a special lady my Grandma was but also that you can be happy to matter your circumstances – simply be grateful for what you have, work hard and love those that love you.

Ethel Lorraine Kalanick, 92, died September 5, after being diagnosed with lung cancer. Ethel Lorraine Pewitt was born January 15, 1919, in Havre, MT to Luther Earl and Ethel Pewitt. Her father died when she was just 2 years old and she was lovingly raised by her mother and step-father, Albert Kowalczyk, along with her younger siblings Elton, Louise, Vera, and Albert Jr.

She treasured her family and childhood and often spoke of her childhood home and spending summers in the Little Rockies on her aunt’s farm. After a ‘love at first sight’ meeting at a dance, she married the partner of her life, Steve Kalanick, on October 17, 1937. She fondly recalled their wedding cake made by friends, a giant angel food cake baked in a wash tub with a large jar to create the center hole. They worked diligently and later bought his parents’ homesteaded farm and ranch near Big Sandy, MT. She told of her first day being married and on the farm: as a “city girl” from Havre she didn’t know what to do, but after seeing Steve milk the cow after returning from a long day of working in the coal mine, she felt so badly that the next morning she took him by the hand and led him out to teach her how it was done.

She spoke often of the joy that came from farm life: raising hundreds of chickens; their two large gardens; cooking with her daughters for large crews of family, friends, and hired hands; and once (in their seventies) she and Steve took in the entire wheat harvest on their own. They shared life’s adventures while living in the tiny homestead house. When their youngest child was two years old they built a two-story home with plumbing and electricity. They delighted in raising their five children and found exceptional enjoyment in the successive arrival of their seven grandchildren, five great-grandchildren, and a great-great-granddaughter.

Together they farmed for 65 years before retiring and moving to Great Falls. In 2010 they celebrated their 73rd anniversary and the following February they were recognized as Montana’s longest married couple. They deeply valued their family, friends, and each other.

This showed in everything from her life-long love for and friendship with her mother, and taking care of Steve’s parents, to making mud-pies with her grandchildren. Ethel’s grand/great-grandchildren loved her dearly and enjoy reminiscing about summers and holidays on the farm, all getting together to build “The Contraption”, and often try to replicate her delicious cooking.

She was preceded in death by her son, Steve ‘Butch’ Kalanick; her daughter, Judy Willey; and her grandson Steve Romans. She is survived by her husband Steve Kalanick in Great Falls, her sister Louise Flynn in Arizona, three of their children:  Ethel ‘Toots’ Atkinson in Idaho, Ronald Kalanick (Kandra) in California, and Richard ‘Dick’ Kalanick in Montana;  seven grandchildren:  Perry Romans, Ethel Louise‘Sis’ Delaney, Chris Brown, Dawn Kalanick, Travis Kalanick, Dr. Brooke Kalanick-Larson (Joe), Dustin Kalanick (Jessica); five great-grandchildren; and one great-great-granddaughter. She died peacefully at home in the presence of her husband, her son Richard, and their beloved nurse, Rose Wright. Per Ethel’s wishes, there will be a private family memorial and joyful celebration of life.

Why Don’t I Look Like Her? How To Stop Comparing

Yesterday I made the point that we can’t simply look at another woman’s body,…