The Scale: Step On It Or Skip It? 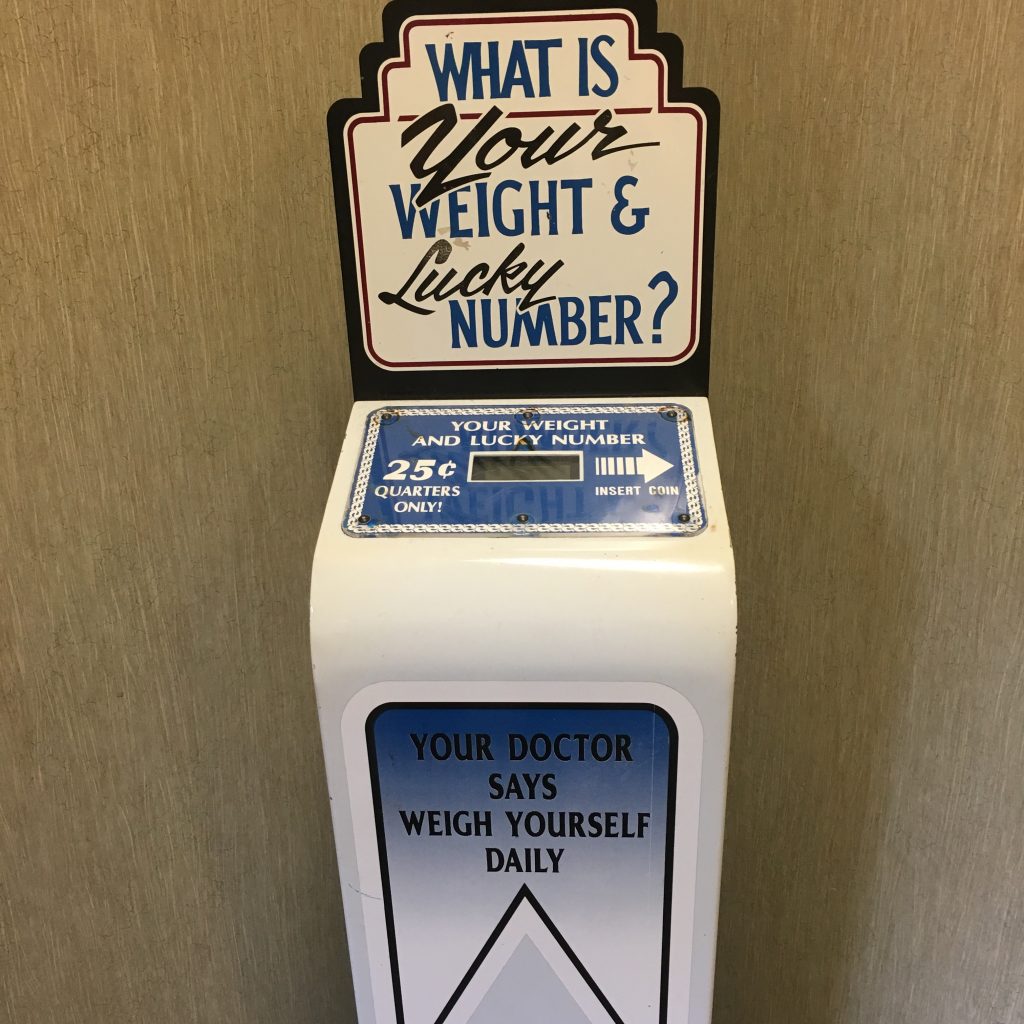 I saw this silly scale at a rest area in upstate NY. There were several things about it that cracked me up: One, that your weight is your lucky number.

Weight is definitely a number, but unfortunately most women don’t feel lucky about the number they see on the scale most days. In fact, the women I work with in general have love-hate-mostly-hate relationship with the scale. The second was that “Your doctor says to weigh yourself every day”. I’m not sure this is at all true, but it certainly isn’t true in my practice, for reasons I’ll get to in a bit. Here was my status/comment when I posted the pic: 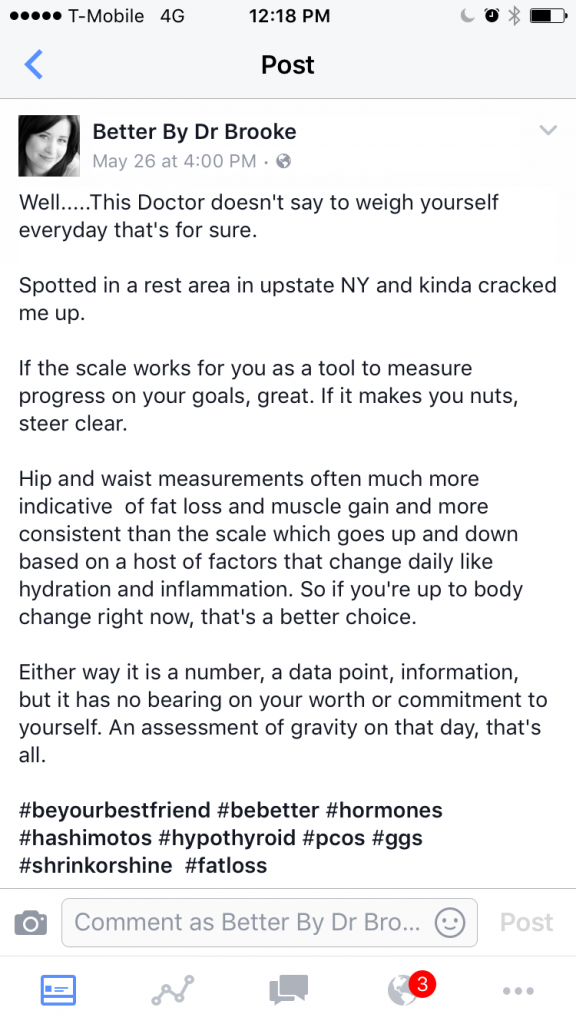 Someone commented – one of my fav people in the world actually, DLU 🙂 – that they get what I was saying intellectually, but it still feels so good to lose a pound, to see that number on the scale go down.

I totally get what she’s saying. If the goal you’re up to is weight loss, then of course a step closer to that goal is going to feel damn good! The problem with the scale though is that some days it makes us feel great, other days it makes us feel like crap. And perhaps the bigger issue with the scale is that it isn’t our only or even our best tool to assess whether your hard efforts in the gym and the kitchen are working.

Here are the downsides to the scale and some better options for assessing your progress:

I have met so many women that refuse to get on the scale even at a doctor’s visit or they get on but say, “I’m going to look away so don’t tell me what it says.” Let’s face it, the scale and us ladies go wayyyy back. We’ve shared a lot of bad times together. If the scale gives you another reason to beat yourself up, just skip it.

The scale is maddening. Weight loss, as much as we would like it to be different, is not a linear process.  If you’re on the right plan and your hormones are happy, the overall trend will be down but it’s rife with spikes, valleys and plateaus. The frustrating nature of weight loss, the three pounds down one pound up game, is one of the reasons I recommend having a strength goal in addition to having a weight goal.

I remember during one particularity loathsome time in my life when I stepped on the scale to see it say the same damn number it had for two weeks. I was working so hard but I was stuck. I stepped off and stepped back on (ya know, after moving the scale around on my bathroom floor cuz maybe it was on uneven ground right?) Still the same.

I felt defeated, I felt frustrated and I totally forgot that for the first time in my adult life I did three pull ups the day before.

All that mattered was that number I didn’t want to see. I used it as a way to kick my own butt a bit more, beat myself up for not doing more, not doing better. I used it as fuel for a “punishment workout”. I forgot all the ways in which I was doing better, all the ways I was actually pretty awesome that the scale can’t show me – like doing 3 pull ups! Don’t lose sight of your progress in all areas just because you’re stuck in one. You’re stronger, you’re eating more veggies or getting more sleep, you’re being consistent and committed, you’re better in many ways just from having embarked on your journey. And chances are you have a whole lot else going for you than what the scale says 🙂

The scale may not be telling you what you need to know.

The scale merely assesses weight, which can be muscle, fat or water. It will vary depending on your hormones, water retention, inflammation, lack of sleep, increased stress, as well as actual fat or muscle loss and gain. It is also simply because weight loss is not a consistent downward trend, there will be steps back and forward and times of standing still.

THIS IS NORMAL. But if you step on and see it go in the wrong direction we often jump to the conclusion we have to dig in deeper, eat even less and workout even more – which often comes back to bite us. Or we give up all together, which also comes back to bite us in the probably now bigger bottom.

Again, the scale assesses weight, but not changes in muscle or fat. Fat as we know takes up a bit more space, muscle is more compact so while we may be losing fat and even losing inches, the scale often doesn’t reflect that. If you’re after weight loss, you’re likely more specifically after fat loss and the scale does a lousy job of sussing that out for you. Body comp testing is better but even that is largely affected by water balance and the accuracy of various brands.

Caliper or skin fold testing varies significantly because of user error, specifically getting the same location each time. And you have to have someone else do it for you which isn’t always ideal. This is why my favorite way to assess your progress is to keep the scale because it is easy and can be useful, but in addition, assess chest, waist and hip measurements (at the nipple line, at the belly button and at the widest part of the hips, respectively).  And then use these ratios to monitor progress. Both chest to waist and waist to hip should be about 0.7. This ratio is the classic feminine shape and these measurements help you monitor progress away from being either top or bottom heavy and a more even distribution of normal (at times troublesome) “female fat” (boobs and hips).

These ratios should range from 0.5 to 1.0 and the closer you get to 0.7 the closer you are to balanced fat distribution. I recommend this tape measure as it has a spring in it and you can be more confident that you’re putting the same amount of tension on the tape each time. The scale and these measurements have been the best tools in my experience to track progress and assess with ease if you’re losing weight or fat.

OK, I know what you’re thinking

I started off this article saying the scale was sorta bunk and always maddening, then I said I actually recommend using it (in conjunction with measurements), but here’s the deal: you can use the scale to your advantage, but you have to do it right. And I don’t mean do it right like be accurate, like consistently under the same circumstances (i.e. properly hydrated, not after flying or drinking alcohol, same day of week and same time of day, etc.) – which you also have to do, I mean you have to use the scale with the right mindset.

The scale is information. It is data. It is feedback for you about how your body is doing with your current plan. It doesn’t mean anything about you.

You are simply as worthy of love and happiness if the scale changes, stays the same, goes in the right or wrong direction. Don’t give it meaning, don’t follow a story that doesn’t suit your happiness based on this number. Take it as a data point to make a change or stay the course, that’s all. You may be off track a bit, this can help you adjust. You may be on to your best diet and exercise plan, this can help you stay committed and keep on your current  program. Or it can ruin you day if you let it. I always say this to my patients, “Think of a ship captain. If they realize they are off course, they course correct and get back on track. They don’t get upset”.

I think the worst is when you wake up feeling pretty great and then step on the scale and…..it’s not the result you wanted. You didn’t lose or maybe you even gained. Remember that feeling you had?

That great feeling you had BEFORE you stepped on the scale? How fabulous you felt? Here’s the truth: you actually weigh exactly the same when you felt awesome as you do now. You weigh the same now as you did BEFORE you stepped on the scale so you can still feel AS GOOD as you did before, nothing changed except you took in a new piece of data. Can you do that? Can you detach from any meaning you attribute to the number and just take it as data? Or does the scale just still really gets to you? If you can’t detach OR have to pick one assessment tool, don’t choose the scale. Stick with the measurements only. They at least represent fat loss better than the scale alone. But even measurements are just a number.

If you have a goal to lose weight because you are not feeling totally comfortable where you are at, aren’t feeling at home in your body, that’s great and you do need some way of monitoring your progress. The scale can be a part of it so long as it doesn’t make you feel bad about yourself, spur crazy crap like jumping off the scale to go for your second workout of the day OR diving into a hot fudge sundae because you gained a pound and why bother this will never work anyway??

That’s the danger. So use it if you can not assign any meaning associated with that number and you can feel as strong in yourself before you step on as after. The scale is data. Check in as well on measurements. Listen also to your hormone talk: appetite, cravings, energy and sleep.

Together, you have a lot of information to decide if what you’re doing is working for you. What doesn’t work is letting the scale ruin your day. Remember your progress in other areas. Work on your strength goal always, as well as a weight loss goal.  And don’t give the scale so much power. For more tips like these on how to monitor the process and progress of doing BETTER, grab this free download.

#1 Expose Yourself To Cold Hydrotherapy is a longstanding therapy in naturopathic medicine, but…