I’m just barely coming down off my high from the Women’s Fitness Summit last weekend. Other than giving birth in July, it’s been awhile since I’ve been that friggin’ excited and totally exhausted at the same time. And I’m not alone, check out #wfs14 on Facebook to see all the inspiration and love as women recap this fabulous weekend. Each speaker (granted I didn’t catch them all as I was running in and out to feed the baby and tend to my toddler) had one common message: help women be strong. Strong in their bodies, strong in their minds and strong in themselves. This wasn’t just about lifting heavy weights, but about finding the strength to stand up for themselves and to stand up and be themselves. The WFS was the brainchild of Cass Forsythe but had an extra power punch with its collaboration with Girls Gone Strong. I was fortunate enough to present among many of my she-roes and stand up in front of a group that individually and collectively is a force to be reckoned with. But when Cass asked me to speak at this summit my first thought was, you’ve got to be kidding! Me spending a weekend that will be documented in a hundred Instagram photos, just couple months postpartum, next to the fittest women in the industry? I just can’t…. Oh, and GGS is going to be filming the whole thing? And Molly wants me on camera for several interviews and a few demos? I just can’t….. I said yes but inside I was thinking, this is going to be a nightmare. I’ve always struggled to feel  I belong in this industry because I fear I don’t necessarily “look the part” and for the last 4 years I’ve been pregnant, breastfeeding or injured. Let’s face it, I’m not in my best shape right now. But then I remembered, that’s exactly what Girls Gone Strong is about. They acknowledge that fit women’s bodies don’t all look the same, each individual woman’s body won’t look the same throughout her life and that it takes strength to show up at each of those times – especially those when we don’t feel our best. GGS is not about having no cellulite or having the biggest deadlift. It’s about owning the strength to be where you’re at with some grace and striving to be even stronger. And that ain’t always easy. No one gets this more than other women, which is what makes this movement in fitness of “for women by women” just so wonderful. Trusting this, I quieted that voice in my head and thought, maybe I can. Actually, yes I definitely can. I am strong enough in myself to do that. Yes I am. Because that’s Girls Gone Strong. Worst case, I have another momentary freak-out in which case I can lean on Cass or Molly to get my head right again. That’s the thing about GGS, it is women that see your strength and awesomeness in the times when you can’t. In this industry I’ve never been sure I belonged in, GGS is where I feel at home.

The Girls Gone Strong Advisory Board

Its real women, showing their real struggles and their real triumphs.  There’s bravery happening – like me filming my bare three months out mummy tummy on camera (yeah I did that!).  Cuz that’s real.  That’s Girls Gone Strong. Its home for all women whether it’s your first day at the gym or you own more workout clothes than regular. It’s a place where your potential expands and your strength is supported. I assumed I’d feel totally star struck when I met some of my idols like Jen Comas Keck, Jen Sinkler and Erin Brown. But I just felt in awe of the collective respect and love every woman in that room felt for each other.  It wasn’t the experts up front and the attendees in the chairs, it was simply a room full of passionate, strong women basking in the glow of each other.  It was pretty special.

While I would’ve loved toh ave been up there in my best body, that’s not where I’m at right now – and that’s the reality for many women. I’m not the only one with a postpartum body that’s harder to love some days than others. Having more body fat or feeling weak after an injury is part of many women’s reality. Having stubborn hormones that leave you wondering what’s wrong with me? Why can’t my body just lean up? That’s part of many women’s reality too. On the flipside, some women’s reality is why can’t I put on more muscle? Or why can’t I do a pull up yet? And GGS is reality.  It’s the place where real women can just be real women and the strength it takes to do that is beautiful. I felt overwhelmingly loved, accepted and supported at a fitness conference.  Me! The girl who shouldn’t be there cuz of blah blah blah (my reasons don’t matter enough to list, they are BS anyway). Instead of playing small, I summoned my strength. I showed up. I schlepped two babies to Kansas City – the GGS community assured me that I could. 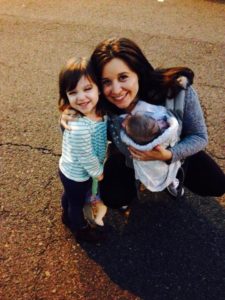 I trusted that a midst the GGS group there would be someone who needed to see me show up just as I am – a tired, new mama trying to get strong again. I trusted there would be women upon seeing the dark circles under my eyes offering up a familiar, “I’ve been there”.  And I trust that when Molly says, “You’re amazing, I love you!” she means it. That’s Girls Gone Strong. Welcome home, we love you. 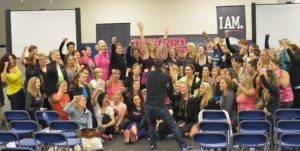 I’m not in this shot because I had to round up the family and get to the airport. But my heart is there, with arms up saying yeah!

**Obviously, if you aren’t already following Girls Gone Strong, I think you should! **And obviously, if you’re letting where you’re at now stop you from living your life, read this. Then get to living! Had I let my insecurities stop me I couldn’t have shared the info I had for them – which I had resoundingly positive feedback on – and I’d have missed out meeting some new she-r0es like Joy Victoria, Karen Smith and Marni Sumbal. So get out there and be strong!

Why Don’t I Look Like Her? How To Stop Comparing

Yesterday I made the point that we can’t simply look at another woman’s body,…